New York is one of the greatest cities in the world. It is filled with different activities with famous sites at every book and corner. Many tourists come here to enjoy Broadway Shows; others come specifically to shop and dine; and many come to see famous sites like the Statue of Liberty, Empire State Building, Brooklyn Bridge, Central Park, etc. 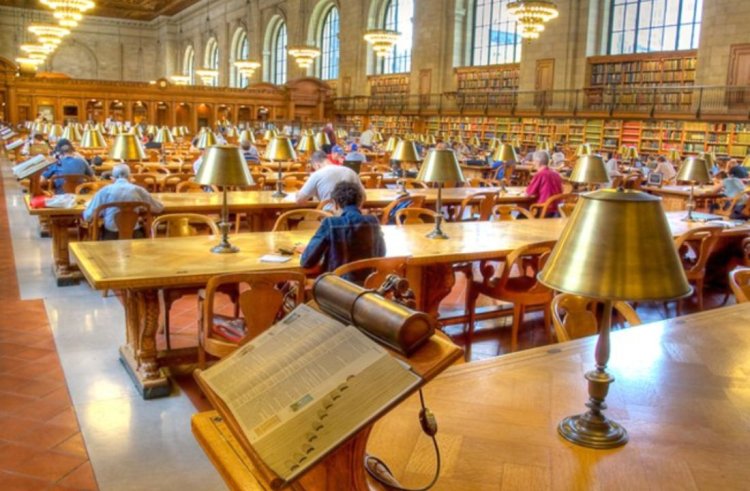 The city is a delight for sightseeing for many because Many of the best places to visit in New York are within walking distance of each other or just a short ride away. New York has also seen major growth in the past few years, and new attractions have popped up in the city for tourists to enjoy, like the High Line and One World Observatory, which offer unique perspectives of the city.

With all of this being said, one might make up their mind to visit this place, but there is a lot that the city offers, which practically makes it impossible for anyone to explore the entire city in one go. However, do not worry. We have got it all sorted for you. Here is a list of all the best tourist places in the city which one has to explore when you visit the city. 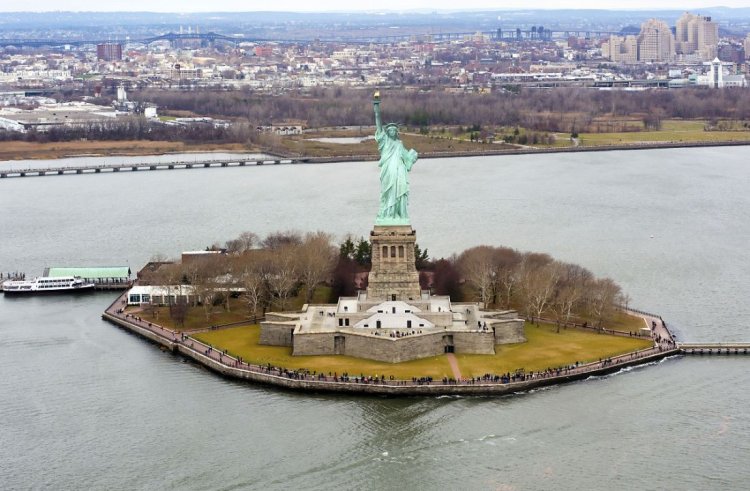 The Statue of Liberty is America's one of most iconic sight and is also on the bucket list of every tourist who visits New York. Built-in 1886, it remains a world symbol of freedom and is one of the top attractions in America.

The Statue of Liberty which stands 152 feet tall from the base to the torch and weighs over 450,000 pounds is the tallest statue in the Unites States . You can see the statue at the southernmost point of Manhattan, Battery Park. The best thing to do, though, is to take a little boat ride to Liberty Island and visit the Statue of Liberty up close to appreciate it fully.

In addition to visiting the statue, you may also visit Ellis Island and tour the Immigration Museum, which is housed in the complex of historic immigration stations where countless immigrants were processed before
being allowed to enter the country.

The statue's admission tickets are in high demand. Pre-purchasing ticket is a requirement at the busiest times of the year and a smart move all year round. Plan your journey accordingly if you're taking the Statue of Liberty and Ellis Island Tour, which takes you to both locations. 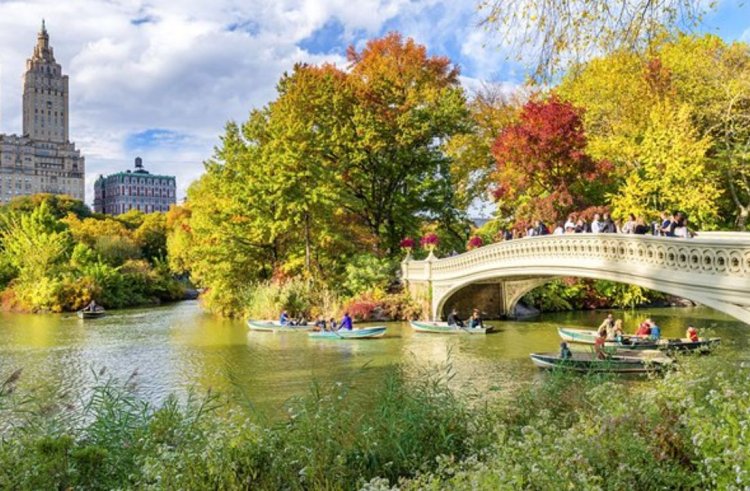 Most people have probably heard of Central Park at some point or another. And why not, given that it is one of New York's most well-known attractions? One feature that makes New York a lovely and pleasant city is this enormous park in the middle of the city, which is 2.5 miles long  and half a mile wide.

In addition to being a wonderful area to spend time in nature, Central Park is home to numerous attractions, most of which are free, making it one of the few inexpensive things to do in NYC. The Lake, Strawberry Fields, the Central Park Zoo, and Belvedere Castle are a few of the most well-liked tourist destinations.

So a walk, peddle, or carriage ride through the crisscrossing pathways of Central Park is a must-do on anyone's New York City itinerary. You can even get your skates in winter and glide across Wollman Rink.

Rockefeller Center is one of the most popular tourist destinations in New York. NBC-TV and other media are housed in this huge mall and entertainment complex in the heart of Manhattan. The Art Deco skyscraper 30 Rockefeller Plaza, with its 70 stories and renowned Top of the Rock Observation Deck, remains the area's focal point.On the other side, the deck consists of the 67th, 69th, and 70th floors.

Spectacular views are available in both indoor and outdoor viewing areas, day or night. A benefit of purchasing a Deck ticket in advance is the flexible voucher redemption policy that allows you to change the day if your plans change or the weather isn't cooperative.

One of the most well-liked winter activities in New York City is ice skating on the outdoor rink at the base of the tower. This is a great activity for families and couples.

If you enjoy skating, you can schedule your visit during the rink's typical operating season of October through April. 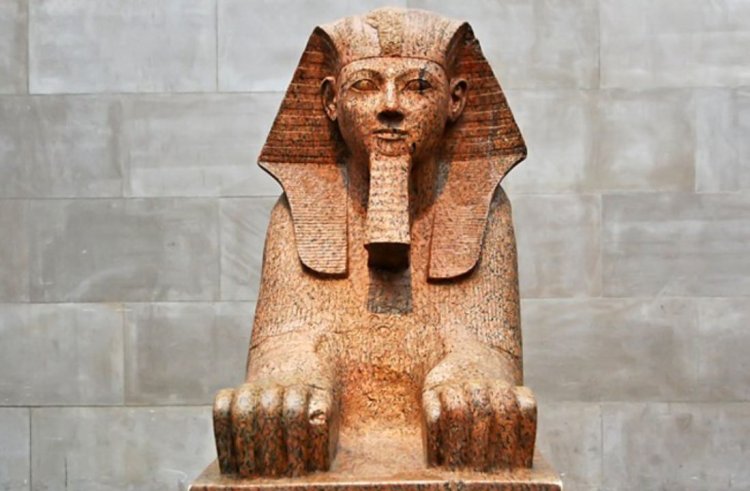 I'm sure everyone has heard of the Met Gala. The Met Gala is held at the Metropolitan Museum of Art every year. One of the most well-known museums in the United States was founded in 1870 and is known as the Met. There are more than two million works of art in The Met's permanent collection, spanning 5,000 years.

The three locations in the museum that get the most visitors. Even so, The Met Fifth Avenue serves as the focal point and features American decorative arts, weapons and armor, costumes, Egyptian art, musical instruments, pictures, and much more.

Broadway and the Theater District 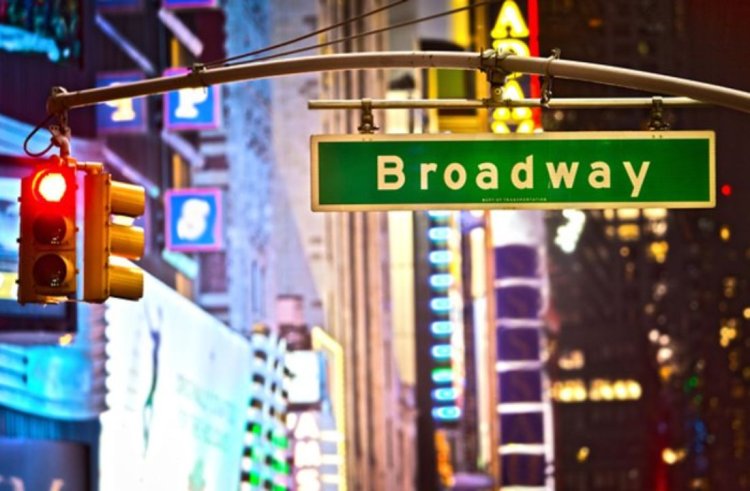 As the capital of American theatre and one of the best cities to see both the newest productions and time-tested classics, Broadway performances are among the top things to do in New York City.

Typically, the term "Broadway" only refers to Broadway theatre, which includes a variety of theatres located in the Theater District and on Broadway itself. Tickets for the most well-liked performances should be ordered well in advance. 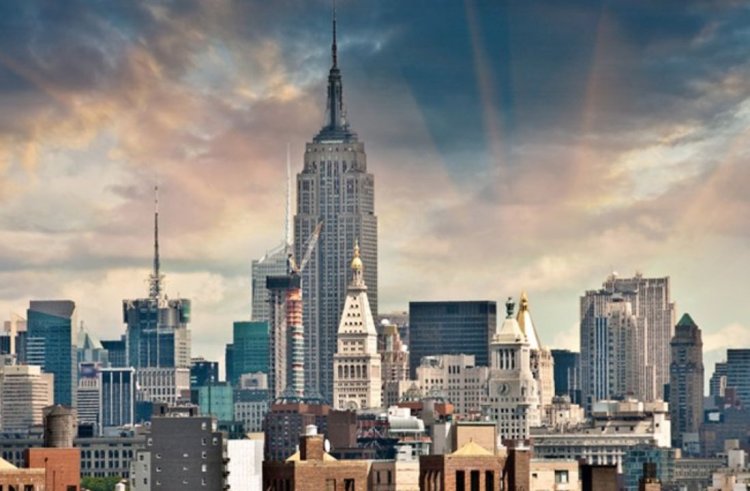 The Empire State Building is one of New York's most famous landmarks and key tourist attractions. It is a 381-meter-tall, 102-story building and was the tallest in the world until the 1 World Trade Center tower rose higher 41 years later.

The 86th Floor Observatory, 1,050 feet, is the city's highest open-air observation deck and what most people expect to find when they go up the Empire State Building. It is quite a bit of a famous attraction which is featured in many movies and shows. 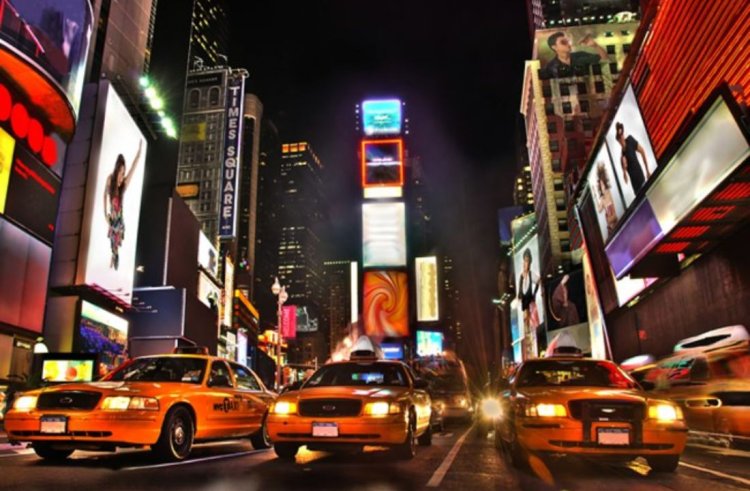 Times Square is the bustling commercial center located at Broadway and 7th Avenue intersection. It is often called the Crossroads of the World and certainly lives up to that nickname.

The place is visited by more than one million people every three days, which makes it one of the most visited tourist attractions in New York State. It glows day and night with neon advertisements and signs, which gives the streets a carnival atmosphere.

Times Square is also one of the best shopping hubs for shopping lovers as it has brands ranging from Forever 21 to all the luxurious brands. Planet Hollywood and the Hard Rock Cafe are also nearby, adding to the spectacle. 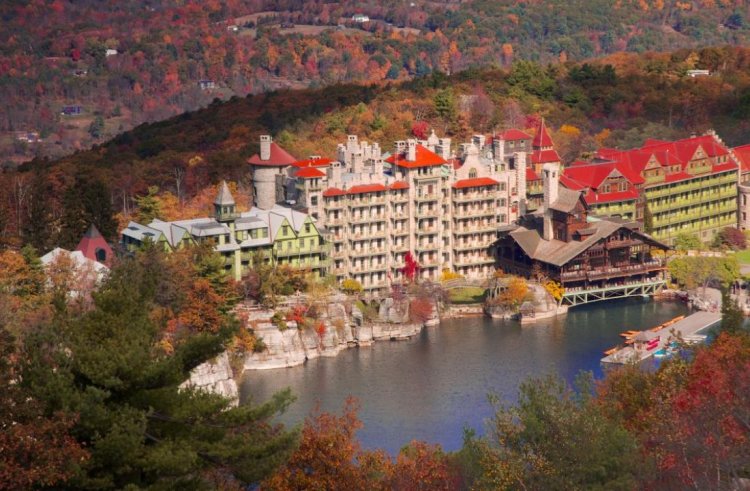 There is always something to do or experience in the valley all year round, with autumn being a particular favorite because of the changing of the leaves. 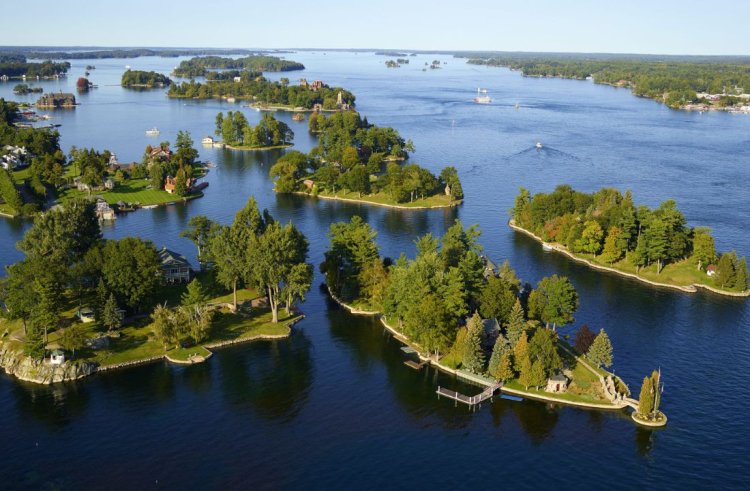 This beautiful collection of islands in the St. Lawrence River is why it is known as Thousand Islands. In addition to the beautiful scenery that follows the island,  there are several attractions to enjoy here, including Boldt Castle on Heart Island, which one man built out of adoration for his wife.

Another attraction is the Antique Boat Museum, which gives the area history of boats built or sailed here. For those who scuba dive, wreck diving here is purported to be some of the best in the world. 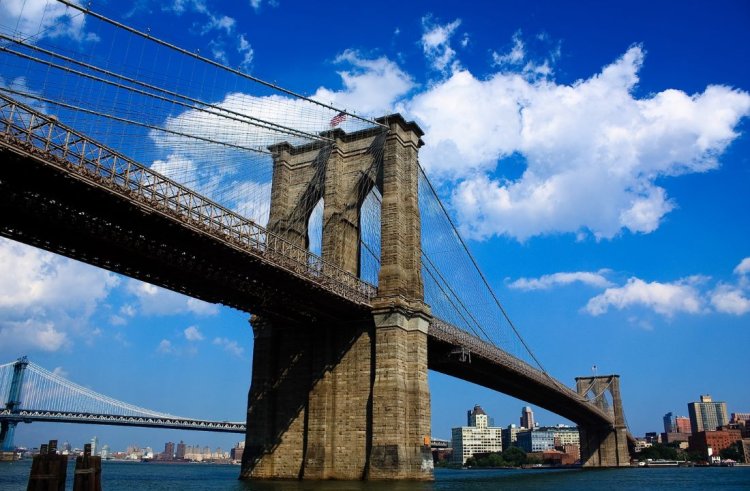 The Brooklyn Bridge, one of the city's most famous sights with its Gothic-shaped arches and suspension cables, has inspired countless poets, musicians, and artists. The first steel suspension bridge ever built, this historic bridge spans the East River from Manhattan to Brooklyn. It was finished in 1883.

Beautiful views of Manhattan, the East River, and the area beyond the Statue of Liberty may be seen from the bridge. Another option is to bike over the bridge, but cycling might be slow and difficult on busy days due to the substantial pedestrian traffic. Be advised that the bridge's entrance is quite far from the water. 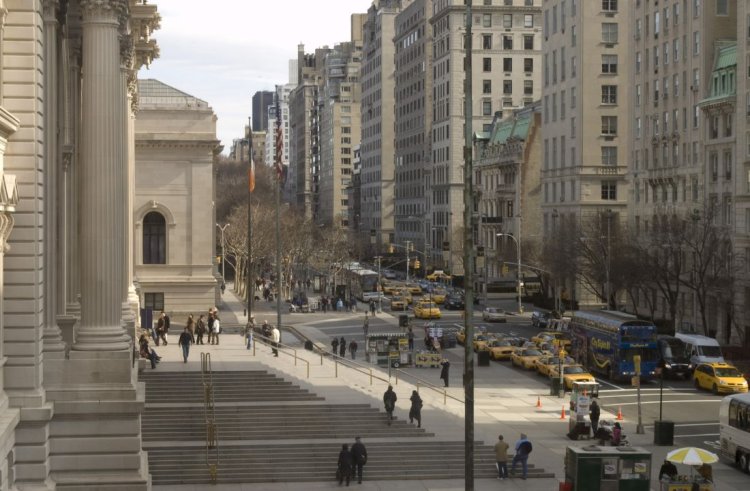 One of the busiest retail avenues in America is Fifth Avenue. For those who enjoy shopping, it is a paradise. The top shopping district in New York is Fifth Avenue, home to the flagship locations of numerous opulent retailers, like Cartier, Tiffany, Bergdorf-Goodman, Apple Store, etc.

Even people who don't shop can enjoy a stroll down Fifth Avenue. The ideal region is between 60th Street and 40th Street, or roughly from the south end of Central Park to the New York Public Library. 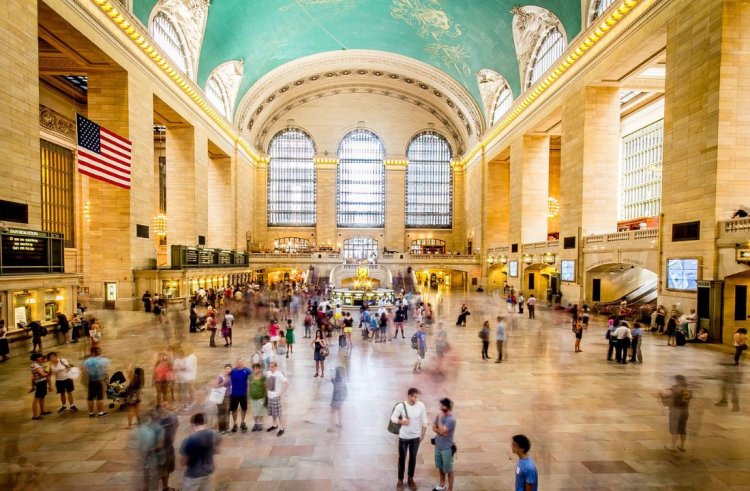 Grand Central Terminal, also known as Grand Central Station, is one of the main attractions of New York City. It is a Beaux Arts building, and it's worth popping in to look at this famous landmark. The building opened in 1913 as a terminal for the subway and train stations.

You cannot miss the highlights of the place, which are the Grand Staircase, where you can stop to gaze out over the concourse and the beautifully restored ceiling, which shows the celestial scenes. 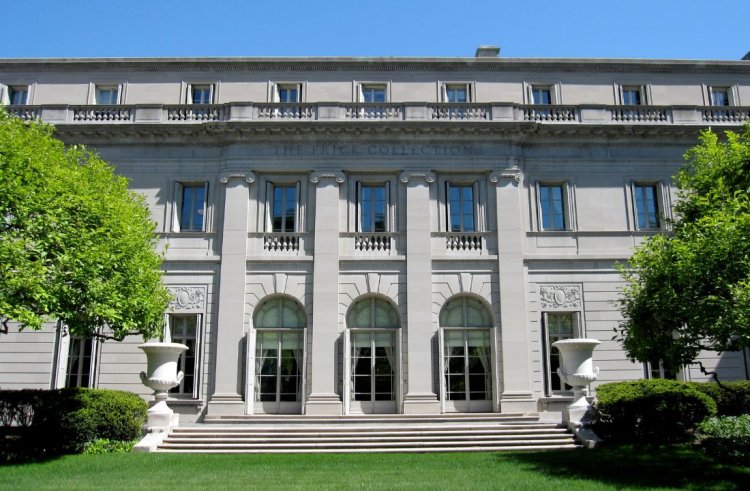 The Frick Collection tops the list of New York City museums. It was started in the early 1900s; the building and the original collection were donated by Henry Clay Frick, who had the mansion built to display his art collection.

The sixteen galleries that house the artwork—paintings, china, and furniture—are exquisitely designed. Some of the best pieces by Monet, Rembrandt, Bellini, El Greco, and many more well-known artists are on show.

The collections are more haphazardly organized with entertainment in mind rather than according to period, artist, or nation. The mansion's rooms are arranged around a lovely Garden Court with a central pond and tropical vegetation.