Amanda Kloots: I Was Scared To Move Into My First Home Without My Late Husband Nick Cordero

Amanda Kloots: I Was Scared To Move Into My First Home Without My Late Husband Nick Cordero

Co-host of The Talk tells the press 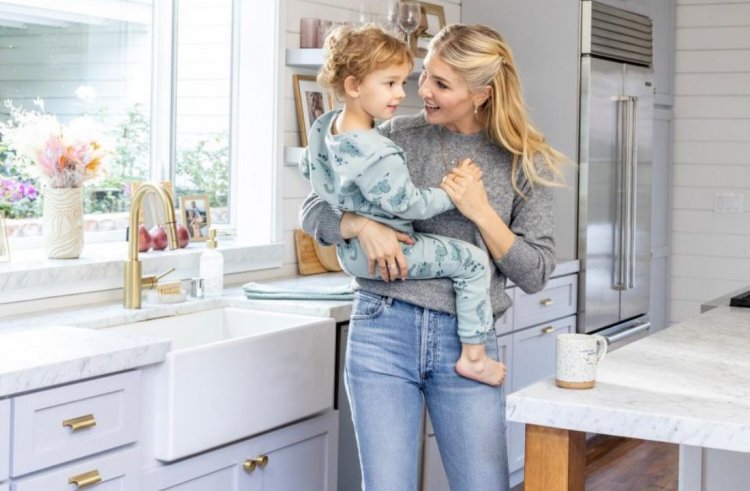 From her new home in Los Angeles, the co-host of The Talk tells the press, "It feels a lot like Nick moved us here." Amanda Kloots has taken a big step since her husband, Nick Cordero, died of COVID-19. She and their 3-year-old son Elvis Eduardo moved out of the home they used to share and into a new one of their own.
The 40-year-old co-host of The Talk tells the media in an exclusive interview that she was scared to move. The house she bought is just down the street from where she lived with Cordero.

The couple got married in 2017, and in March 2020, they moved from New York City to California to make the Broadway actor's dream come true.
The trek happened to take place at the height of the COVID-19 pandemic. Cordero got the disease, and on July 5, 2020, after a long, hard-fought battle, he died from it. His wife, who is also a dancer and a fitness instructor, says she felt her husband's presence the first time she walked into their new home.

Kloots tells the media, "I moved here in May 2021, and it's been great." "I really like this small house. It seems likely that Nick moved us here. As soon as I walked in, I saw lots and lots of signs."

"There was a picture of an astronaut in a full suit with a globe on his head floating away from the earth over the piano," she says. "One of the things I give to people who are grieving is a small astronaut pin because I think the first stages of grief make you feel so far away. You just feel like everything is going on around you and you can't really hear."

Kloots not only felt the musician's warm presence, but she could also see and hear him. She had instant memories of their life together on the East Coast.

"When I walk in, the piano is there, and there are all these records from the previous owner," she says. "The sun was just coming up, and the first thing I saw was that."
She remembers, "I used to tell Nick every day that there was no more room for his vinyl when it was delivered to our New York City apartment." Now that the mother of one is all moved into her new place, she's giving little nods to Cordero to keep his memory alive.

Kloots says that there are a lot of reminders of her late husband all over the house. One of them is a reference to his song "Live Your Life," which Kloots played for him while he was in the hospital. "Upstairs, at the top of the hallway, there is a beautiful painting or photo. There are a few pillows in Elvis' room that have his face on them. He owns all of these coffee table books."

Kloots wanted Cordero's presence to be known, but not everywhere. "He was everywhere in our old house," Kloots says. "When we moved in here, it was very important to me to start over, and I made a lot of effort to do so. We nod and touch, but not in a very public way." "Many of the beautiful things that were sent to me, like pictures and paintings of him, I had to pack away and save or keep at that other house because I wanted this space to feel like a fresh start for us. When you're trying to move on, it's hard to have these reminders all around you. I just wanted little touches instead of seeing them everywhere." Fit For Christmas, Kloots's first movie, comes out on CBS on December 4, and the show The Talk is celebrating the holiday season with a new series called "The Talk Sleighs the Holidays," which is a 12-day gifting extravaganza worth almost $4 million. This is the biggest holiday giveaway series that The Talk has ever done.

Also read: The Actor Of Orange Is The New Black And Former Nfl Player Brad William Henke, Dead At 56