There's some big breaking baby news out of the Cincinnati Zoo!

The world-famous hippo Fiona is now a big sister! On Thursday morning, the Cincinnati Zoo confirmed in a news release that Fiona's mom, Bibi, gave birth to a new hippo, a healthy, full-term calf, born Wednesday at 10 p.m. local time.

The baby hippo weighs at least twice as much as Fiona as she was born six weeks premature in 2017 and could not stand on her own as a newborn, according to the Cincinnati Zoo's director of animal care, Christina Gorsuch. 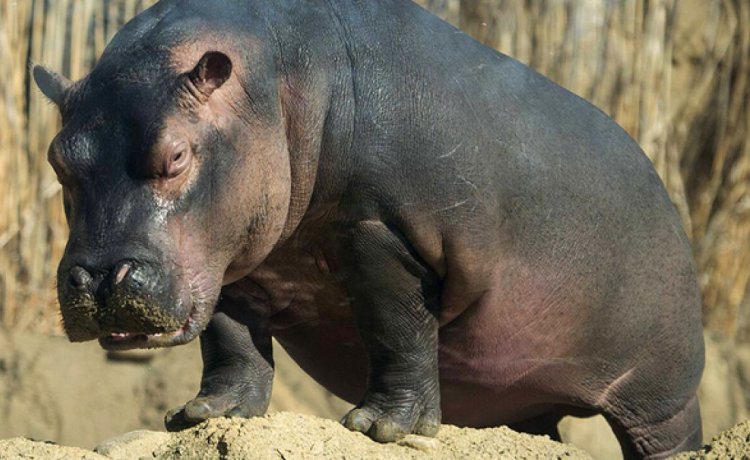 Gorsuch said, "We're not sure if nursing has occurred yet because the water is murky," adding, "It is Bibi's first time nursing since Fiona had to be cared for by the hippo staff, so we are keeping a close eye on them to make sure we do not need to step in."

Bibi and her unnamed baby get time to bond with Fiona and Tucker:

In a statement, the Zoo said Thursday that her behavior appeared consistent with going into labor. In the Zoo's news release, Gorsuch said, "Bibi and the newborn, yet to be named, will spend the next couple of weeks bonding behind the scenes."

He added, "A female would take her baby away from the bloat for about that time in the wild, and we give Bibi a choice to do what feels natural to her." In a news release, the Zoo wrote that while Bibi and the new baby hippo get time to themselves to bond, Fiona and Tucker, the other resident hippo, are growing used to hanging out on their own.

The statement continued, "Keepers have been separating them from Bibi periodically over the past weeks to get them used to be a duo." The Zoo added, "They were so comfy with each other now that 2000-pound Fiona has been seen napping on 4500-pound Tucker."

The Zoo said its animal care team would take shots and videos of Bibi and her newborn hippo for the Zoo to share if and when they can do so without disturbing the animals. The Zoo said visitors hoping to spend time observing the Zoo's famous hippos, Fiona and Tucker, will still be in the hippos' outdoor habitat "except during key introduction times."

According to the Zoo's statement, interested hippo visitors with Cincinnati Zoo memberships have access to live cameras in the hippo habitat that go live from 8:30 a.m. to 5:00 p.m. every day, and it is also noted that cameras may be turned off during animal introductions or if the animal team requires privacy.

Fiona's mom was expected to give birth in mid-August; however, the hippo's birth window could have been 30 days before or after the estimated due date, so the Zoo was prepared for Fiona's sibling to arrive at any moment. In July, the Ohio zoo shared an update on Instagram about the upcoming new hippo baby.

The Cincinnati zoo shared, "According to measurements made during Bibi's last ultrasound, her fetus is bigger than Fiona was when she was born!" Bibi's first baby, Fiona, was born six weeks premature and wouldn't have survived without the intervention of zookeepers. Fiona's resiliency and continued success have made her a star at the Cincinnati Zoo.

When Fiona was born in 2017, she only weighed 29 pounds, 25 pounds less than her species' record weight. Ahead of her sibling's arrival, Fiona celebrated one of her accomplishments. In July, the Zoo shared on Instagram, "Fiona finally hit 2,000 pounds! She weighed in at 2,036 pounds this morning!" adding, "We're so proud of how far she has come! #TeamFiona"

The Cincinnati Zoo initially announced Bibi's pregnancy in a release in April. The new calf's father, Tucker, arrived at the Cincinnati Zoo in September 2021 by way of the San Francisco Zoo, and Bibi and Tucker bred in December 2021, according to WWLT 5.